Your personal information will be kept private and held securely. By submitting information you are agreeing to Jhatkaa keeping you informed about campaigns and agree to the use of cookies in accordance with our privacy policy

Kodaikanal is known a queens of hills and it widely known in world as a good hill station And it should be protected for it was
Hari Bala sundar
You can't smell the aroma of dirt if there's filth around..
Chaithanya
Nature should not be polluted.
Shreyas
because of the damage it is causing to our environment
Mohammed imran
Being a Kodi resident, it’s so important to take care of our environment and wildlife. A problem that’s finally come into light.
Aashika 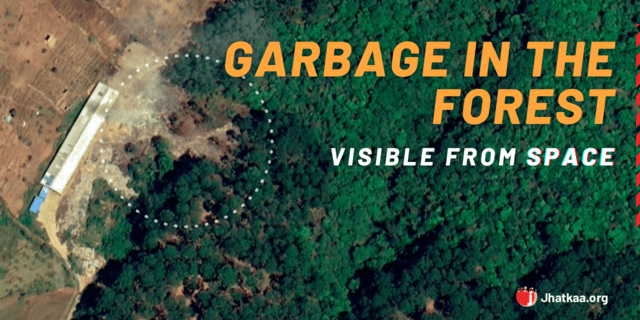 We filed a Public Interest Litigation (PIL) in the Madurai Bench of the Madras High Court and in the first hearing itself, the HC sought a report from the Kodaikanal municipality, Union Ministry of Environment and other concerned authorities.

We met the commissioner Mr. D. Narayan last year and he had assured us that necessary actions will be taken up. However, tons of garbage was still spilling in the pristine forest. Even the progress of the bio waste plant they are setting up is very slow.

We called them multiple times, written to them about the issue, but didn't received any response and hence along with the concerned citizens of Kodaikanal, we raised funds to file a petition in the Madurai High Court.

To showcase our goodwill we contributed towards protective gear for the sanitation workers.

Nearly two months after launching the #CleanKodai campaign and collecting over 4300 signatures from people including you, we finally met Kodaikanal’s commissioner Mr. D. Naryanan to raise the issue of garbage overflowing into the Tiger Sholai Forest.

After a round of talks, the commissioner assured us that necessary actions will be taken up. The key demands they have agreed on:

A forest overflowing with the garbage of Kodaikanal. A dumpsite in violation of the Municipal Solid Waste Management Rules, 2016. A village water source being polluted by mismanaged SWM.

We are urging the Kodaikanal Municipality to rectify their SWM lapses now!

However, around 3 years ago the retaining wall for the dumpyard broke, spilling tonnes of mixed waste into the Tiger Sholai forest below as well as destroying many trees nearby. This also leaches toxic chemicals into the river water source that leads into the forest. I have personally seen Indian Bison (Gaur) and Wild Boar drinking from the polluted water. This water source is also the water source for the village of Perumal Malai down hill from the dump location.

Despite repeated requests to the township they have not yet rectified the issue and continue to dump the garbage openly into the forest. The segregation machinery and composting turrets are not being used at full capacity, neither is there segregation in the township being enforced. Further the workers have repeatedly set fire to the dump, resulting in toxic fumes around the forest that affect those who live nearby.

Join me and urge the Kodaikanal Municipal Commissioner to take action to rectify this violation. There are excellent guidelines laid down for closure of the open dumpyard in the Municipal Solid Wastes (Management and Handling)  Rules, 2016 issued by the Central Pollution Control Board which the municipality can follow to ensure that there is no contamination of the forests.

We filed a Public Interest Litigation (PIL) in the Madurai Bench of the Madras High Court and in the first hearing itself, the HC sought a report from the Kodaikanal municipality, Union Ministry of Environment and other concerned authorities.