Members of the State COVID task force and medical college deans had a meeting with the resident doctors’ body in May. They have agreed to increase the stipend by Rs 10,000.  But MARD representatives are not impressed with the Rs10,000 hike. They stated that it was overdue since August 2018, but never implemented.[2][3]

Dr. Prashant Munde, secretary, Maharashtra Resident Doctors Association (MARD), who also works at Pune’s Sassoon General Hospitals, said, “Recently, the state government offered Rs 80,000-90,000 to graduate doctors while we are more qualified than them and get a stipend of Rs 55,000 in our third year. Also, the salary for doctors working in government hospitals and tribal areas has been increased. Therefore, we wish that our stipend is also increased by at least Rs 25,000.”

Another resident doctor, Dr Preeti Dudhe, who works in Vasantrao Pawar Medical College Hospital and Research Centre, Nasik, said, “We are also working hard during the pandemic and providing our services. While payment to other doctors has been hiked, it is an injustice to us that our payment has not yet been considered for an increase.”

Even for the old amount of 55,000 many resident doctors haven’t been paid for months of April and May. Come forward and take action for our corona warriors. While they are fighting a long battle for us, we have to fight for their demands.

Sign this petition and demand State Education Minister to fulfill the demands of resident doctors of Maharashtra. 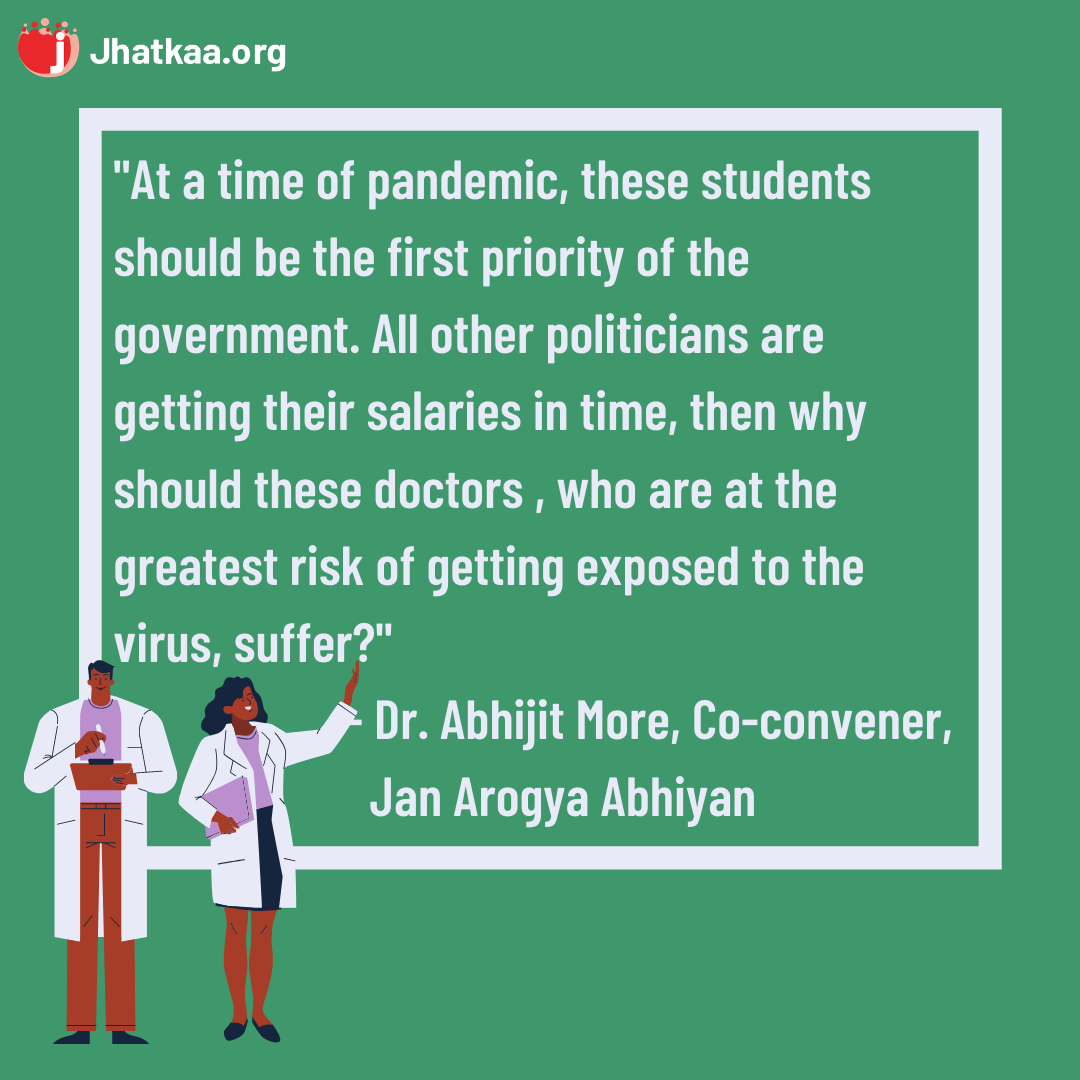 Maharashtra continues to have the highest number of corona cases and deaths in India. We’re still lacking in essential medical facilities from PPE kits, masks to even the number of beds in hospitals. In such essential resource scarcity, resident medical officers (RMO) are filling the gaps in human resources. In Mumbai, the worst-hit city, Resident medical officers (RMO) account for almost 80% of the staff strength in COVID treatment facilities. [1]

Yet many of the Resident doctors haven’t been paid in 3 - 6 months. Only in Mumbai, 25 RMOs have contracted the infection on duty at different civic-run hospitals, while hundreds have been quarantined so far.

“We are directly involved in the treatment of Covid patients. Senior doctors hardly stay in isolation rooms. They just come and check the reports. We work around-the-clock for the patients,” said a doctor from King Edward Memorial (KEM) Hospital.

“At a time of pandemic, these students should be the first priority of the government. All other politicians are getting their salaries in time then why should these doctors, who are at the greatest risk of getting exposed to the virus, suffer?” said Dr Abhijit More, co-convenor, Jan Aarogya Abhiyan while speaking to Hindustan Times.

2. Increase the stipend of resident doctors in Maharashtra, to not just compensate equitably for the work but also to bring it at par with that of other doctors in the state so that our Heroes live a life of pride and dignity.

Your personal information will be kept private and held securely. By submitting information you are agreeing to Jhatkaa keeping you informed about campaigns and agree to the use of cookies in accordance with our privacy policy

524
of 1,000 signatures
Thanks for signing! Your signature has been added.

Next step - spread the word

Thank you for helping us by lending your voice. Please feel free to share this petition with your friends and family.

Resident doctors are working around the clock to tend to the Covid-19 crisis. And yet, they have not been paid their stipend for as long as 3 months in some cases. This is not just unfair but also unethical. Sign this petition demanding State medical education minister to demand a hike in stipend and timely payment of stipends